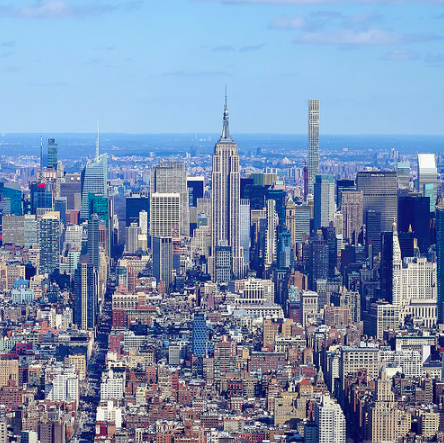 The Big Apple. We’ve all seen countless films and television shows set in the famous city, but for travellers in Europe, Asia and elsewhere, it’s not easy to make the way over. It’s truly worth it though – The City That Never Sleeps is always an exciting and eye-opening one to visit. So for your next trip, make sure you head over and see what all the fuss is about. It’s worth preparing though – there are plenty of pitfalls adventurers can fall into when it comes to New York, so be a savvy traveller (even if it’s your first time) by making sure you follow this guide. It’s important to do a bit of thinking about when and how you’re planning to head to New York. The summer might seem appealing, but remember the streets are rammed with holidaymakers in July and August. If you like cold weather head over in the winter – the city looks beautiful decked in snow and no-one does Christmas like America. But the best time may well be in the Spring – Central Park will be blissful in bloom and the weather is warm but not boiling.

Book flights a couple of months beforehand, and make sure to do some comparing before you do. Flying into JFK is handy, and beware that getting into the city from Newark, the nearby airport in New Jersey, can be costly overnight. If you’re in the area for a week or more, staying outside of Manhattan may well be a good move.

There’s no shortage of hotels across New York’s five boroughs, so you’ll want to have a think about where’s best. Midtown Manhattan is where it all happens, and there’s plenty of budget hotels catering to tourists around there. But they aren’t exactly plush – so if you want comfort for a reasonable place, you may want to hop across the bay and stay in Brooklyn. The trendy, cool borough is only a few subway stops from Manhattan, and it’s a peaceful place to head home to after a day of sightseeing. It’s a pretty awesome place in itself, too – Williamsburg is an insanely cool spot with coffee shops and bars aplenty, so you might even forget about Times Square while you’re there. How to get around

The subway is the cheapest and quickest way to travel big distances, and stretches throughout Manhattan and into the surrounding boroughs. If you’re taking short trips, yellow taxis aren’t too expensive (and they’re pretty iconic, too). The good news is that the city is easy to navigate thanks to its grid system, and walking distances aren’t usually too difficult, so the cheapest way to get around is by foot. And if you want to do a bit of exercise and slip in some sightseeing during your journeys, use the city’s public bikes to cycle around.

So, you’ve arrived in NYC and the city is your oyster. What to do? There’s plenty to choose from – you could start by ticking off the necessary tourist traps, like Times Square. It may seem a little commercial, but it’s certainly worth a visit, if only to marvel at how many people flood into the city from all over the world every day. If you like your shopping, stroll down Fifth Avenue and treat yourself to a few new garments. You’re on holiday, after all.

But there’s plenty of less touristy areas which are definitely worth checking out. You might recognise Greenwich Village, towards the southern end of Manhattan, from television shows like Friends. But in real life, it’s a laid-back and pretty part of the island which doesn’t feel all too much like it’s part of one of the world’s biggest cities. The good news is that there’s plenty of free activities in the city, so enjoying your trip doesn’t have to break the bank. Of course, taking a walk through Central Park is a must – the huge square of gorgeous green land and stunning lakes sit right in the middle of Manhattan, and there are worse ways to spend a warm afternoon than finding a quiet patch of grass in the park. And plenty of museums are walking distance away, which you have a peek in for free or for a low admission fee – check out MoMA, the Museum of Modern Art, for some of the most jaw-dropping contemporary art pieces in the world, or visit the legendary Metropolitan Museum of Art if you’re after a more traditional collection.

Come evening, you’ll need a new activity – and what could beat heading to Broadway and taking in a show? The best theatre in the world is located right there on that glittering street, and walking down the sidewalk is another of an experience. But it’s worth taking the time to enjoy a show, with plenty of dramas, comedies and musicals to choose from. Favorites like Aladdin, Chicago and Phantom of the Opera are currently showing – or, of course, you could try your luck at getting a ticket to Hamilton, the hottest show of the decade. For sport lovers, New York is also a super-sporty town – so there’s plenty of opportunities to take in some action. If you’re over during the NFL season, hop across the Hudson River into New Jersey and enjoy a game. The area has two teams – the New York Giants and the New York Jets. They share a stadium, so see who’s playing while you’re there and pick up a ticket. The Giants are one of the league’s most famous and storied teams, with four Super Bowl wins and a hard-nosed history.

They’re about as legendary as the New York Yankees, the baseball team which plays up in the Bronx, who are also well worth a visit. And if basketball is your game, head over to a Knicks game. The great news is that the city is crazy for any kind of sport – so head to a sports bar and watch whatever’s going on at the time. If you’re over in the spring, put down a bet on the Grand National, the famous annual horse race, which will be shown across the city. Take a look at Oddschecker first to make sure you’ll be onto a winner.

New York, New York – so good they named it twice. Follow in Frank Sinatra’s footsteps and find out what all the fuss is about as soon as possible, because the city is truly one of the best in the world. And the great news is that there’s something for everyone – shopping, theatre, sports, bars and plenty of food; New York City has it all. Remember to stay safe while you travel and most importantly have a great time!